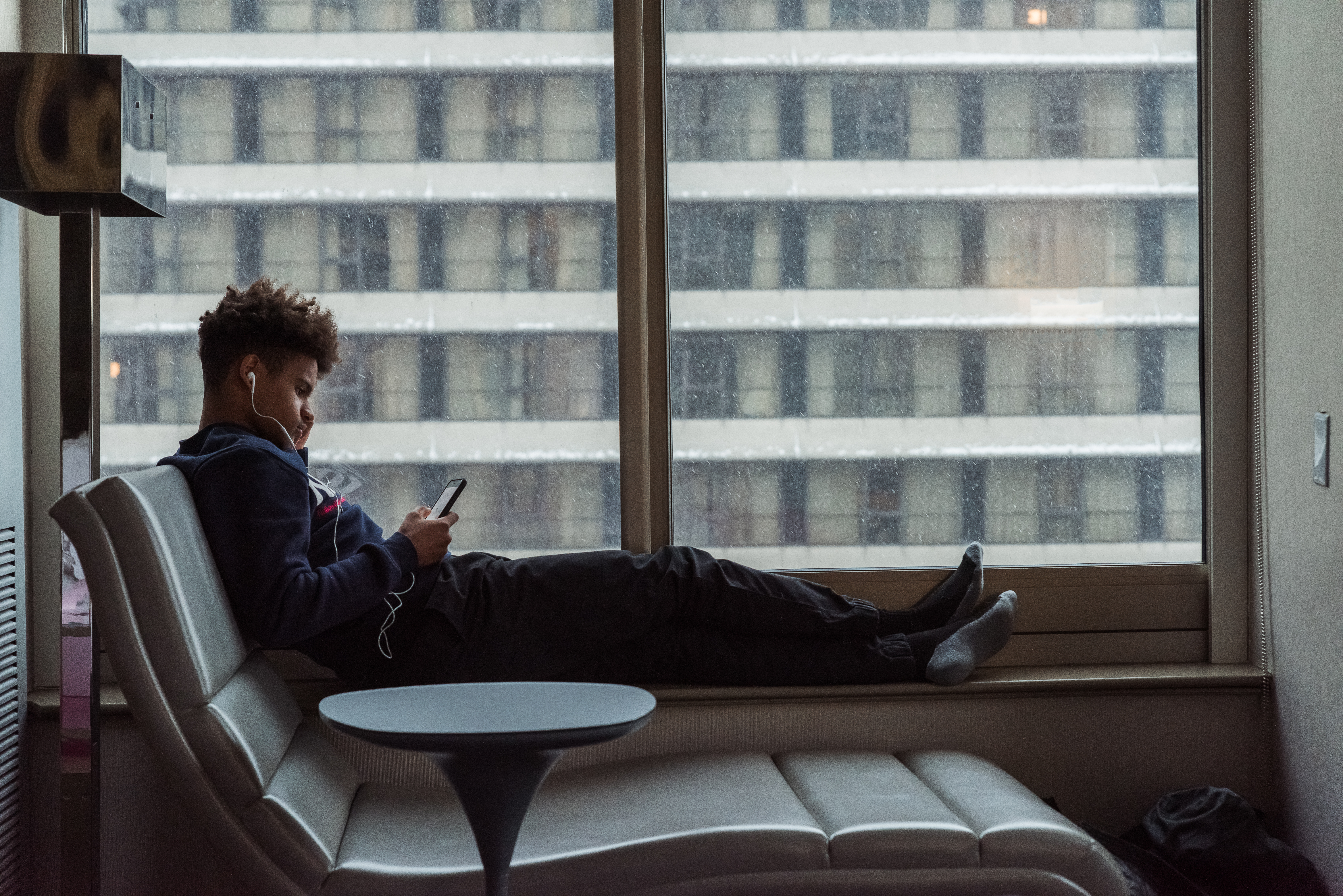 The plane stopped on the tarmac just a few minutes after we departed the gate.  The pilot’s voice spread throughout the cabin.  “Ladies and Gentlemen, I apologize for the delay but a storm is moving into New York City and all runways except for one have been closed at La Guardia.   They’ve asked us to delay our departure for about twenty minutes.  Sit tight; we will be on our way as soon as we can.”

My son, Derek, looked at me and said, “Mom, this is going to be awesome.  We’re going to be in a winter storm in New York City.  I can’t wait.  We better take off soon or we may miss it.”

As we took a car into the city later that afternoon, the snow had not yet moved in but gail force winds had already made themselves at home in Midtown Manhattan.

Arriving at the W Hotel, Derek’s excitement must have shown on his handsome face as the lovely associate asked him if it was his first time in the city.  Having heard it was, she told him it was important then for him to have the best view and experience all of the finest New York City has to offer.  Upgraded to a corner suite, Derek and I made our way on the express elevator to the 49th floor as our ears’ popped and we held to the railings as we adjusted to its speed.

Surprisingly, opening the door I found myself feeling a bit wobbly as I took in the view.  It seems a fear of heights has settled in mysteriously as middle age has proclaimed herself victorious over my youth.  It didn’t help that the 40 mile an hour wind actually howled as it blew past, took the corner and left newly falling snow trailing past in its wake.  As I couldn’t look down and wanted to distract myself from the windows, I decided to busy myself with my suitcase and tried to deny the feeling of the slight sway of the building adjusting to the force.

Derek’s constant chatter a melody in the room until there was simply silence.  I looked over and saw him lounging quietly in “his spot.”  Content, relaxed and texting his friends back home to tell them all about the best vacation he was having already and we had not even been gone 8 hours, yet.

I picked up my Nikon810 from my travel bag to quietly capture the moment before he looked up.  All of 14, having his picture taken is not the top of his priorities or ideas of a good time.  Still I knew, this shot was a “must have” as of all the 700+ photos I would capture in New York City these few captures will always be my favorites.

My best guy settling in to have one of the best weekends of his young life so far.

There is nothing I love more than being Derek and Jessie’s Mom.  Thank you, God, for the privilege.

I Loved You From the Start